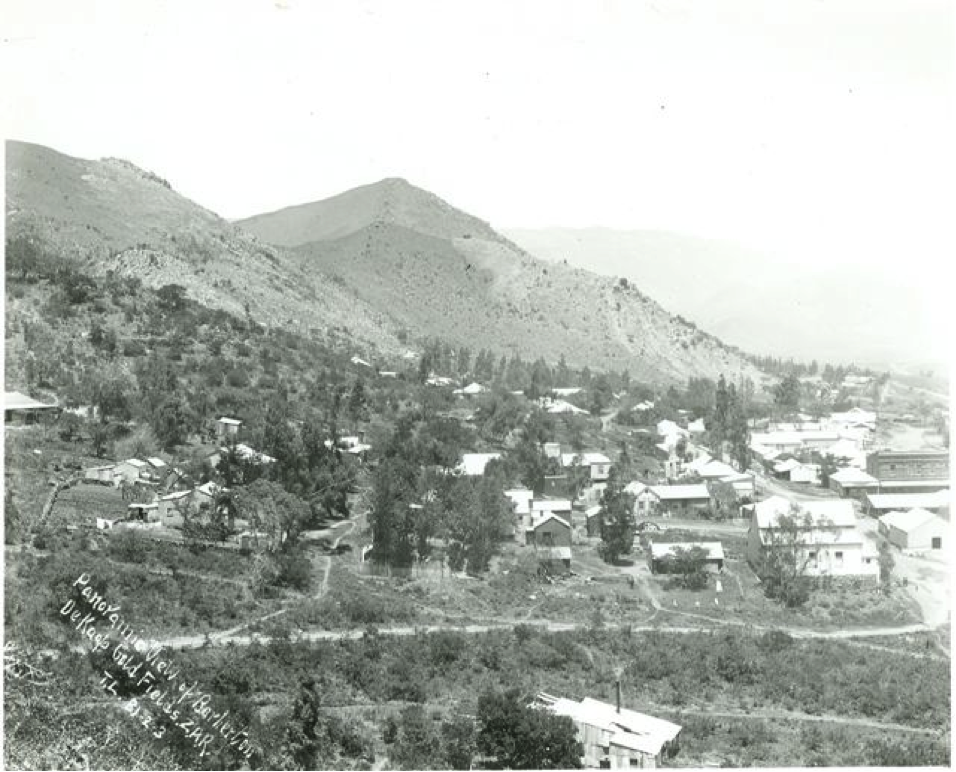 Barberton … founded in 1884 by two brothers, Fred and Harry Barber along with cousin Graham Barber, from Natal, now known in these time as Kwazulu Natal. They discovered what they called the “Barber’s Reef” – a reef so rich in wealth that it glittered with gold. Word traveled like wildfire and a rush of diggers began arriving on the scene and a mass of shacks, stores and canteens sprang up all over.

On June 1884 David Wilson, a mining commissioner of the De Kaap Valley broke a bottle of gin over a lump of rock to christen the town, thus launching its lively career.

Tom McLachlan first discovered gold in the De Kaap Valley in January 1874. It was not economically viable but he stated that if prospected properly then, he believed rich deposits would be found.

The speed with which the town of Barberton grew was astonishing. During 1886 Barberton was at the height of its boom. Two stock exchanges traded night and day. Dozens of canteens, liquor shops and music halls competed with the mines to make the greatest profits in town.

Gold was found on the farms Ameide and Oorschot, three to five miles west of the present town of Barberton, forming part of the block of 13 farms constituting “Moodie’s” concession – given to him by the Transvaal government for his work surveying a railway route from Delagoa Bay, now Maputo, to Pretoria. The Transvaal government had no money to pay Moodie so he was given 13 farms for his efforts.

Auguste Robert known as “FRENCH BOB”, discovered gold on the North Kaap River and pegged the first claims at what became James Town in “The Valley of Death” in 1883, this led to the Barberton gold rush.

James Town was named after Ingram James who was the first person to discover alluvial gold in the Noord Kaap River ” French Bob” approached Moodie for the right to mine under special privilege as discoverer, which Moodie had no right to grant. He was willing to trade fairly with “French Bob” , but from the other diggers he claimed high licence fees and royalty on gold won. In terms of the Gold Law any licence’s were payable to the state and the owner was entitled to half of such licence moneys.

The diggers rightly refused to pay licence’s and royalty to Moodie, and also refused to quit working. An impasse ensued and Moodie commissioned Henry Nourse to act on his behalf.

Nourse arrived, but on his way met Fred and Henry Barber and their cousin Graham, all experienced hunters, with a party en route to the hunting veld. They decided to go with Nourse.

The diggers,under the leadership of Henry Culverwell, refused to pay Moodie anything but also refused to quit. Eventually Culverwell and 28 others were arrested and taken to Pretoria where they were charged and acquitted, but Moodie obtained an interdict against them and they had to cease work. Moodie however, had to realize that he himself had no right to mine or permit mining, and it was not until August 1885 that he got a mining concession.

Eventually all the 13 farms of Moodie’s Concession were brought within the Zuidkaap Goldfields on 28th May 1889.

Meanwhile, the Barber brothers tried their hands at prospecting, and found payable gold in a creek close to the northern boundary of the Moodie’s Concession farm, Brommers, immediately above the present town of Barberton. A gold rush followed, and Barber’s Camp became a hive of activity. A Diggers Committee was formed.

Other towns sprang up, such as , Eureka City. At the height of the rush, Eureka City had a population of 650 men and a handful of women.It was soon even wilder and more lawless than Barberton! It had three hotels, about a dozen canteens, a race track, music hall and some of the flashiest barmaids in the De Kaap Valley. Too much money was spent with too little profit to show for it.

Some companies like Sheba remained and carried Barberton through this difficult period. Eureka City’s ruins lie high in the hills on the north eastern side of the De Kaap Valley. A track from Barberton takes visitors to the site, but there is not a single inhabitant.

The Market Square was the centre of the town’s life. Farmers would come to town spend the night, sell their produce the next day and then leave. Their wagons were left unattended when they were in town and it was accepted that anything on the wagons was safe. Goods started disappearing and soon the culprit, a Chinaman, was caught stealing. He was dragged to a Marula tree and hanged by his neck. Pat Murphy the local policeman rushed to the scene and cut him loose. The Chinaman fled and was never seen again in Barberton.

Places of historical interest in Barberton include the Lewis and Marks Building, the first double storey structure in Transvaal: The Gold Stock exchange (1887), Fernlea House (1893), Belhaven and Stopworth House (1886). The Barberton Museum, on Pilgrim’s Street, houses displays excellent exhibits on aspects of early life in Barberton. 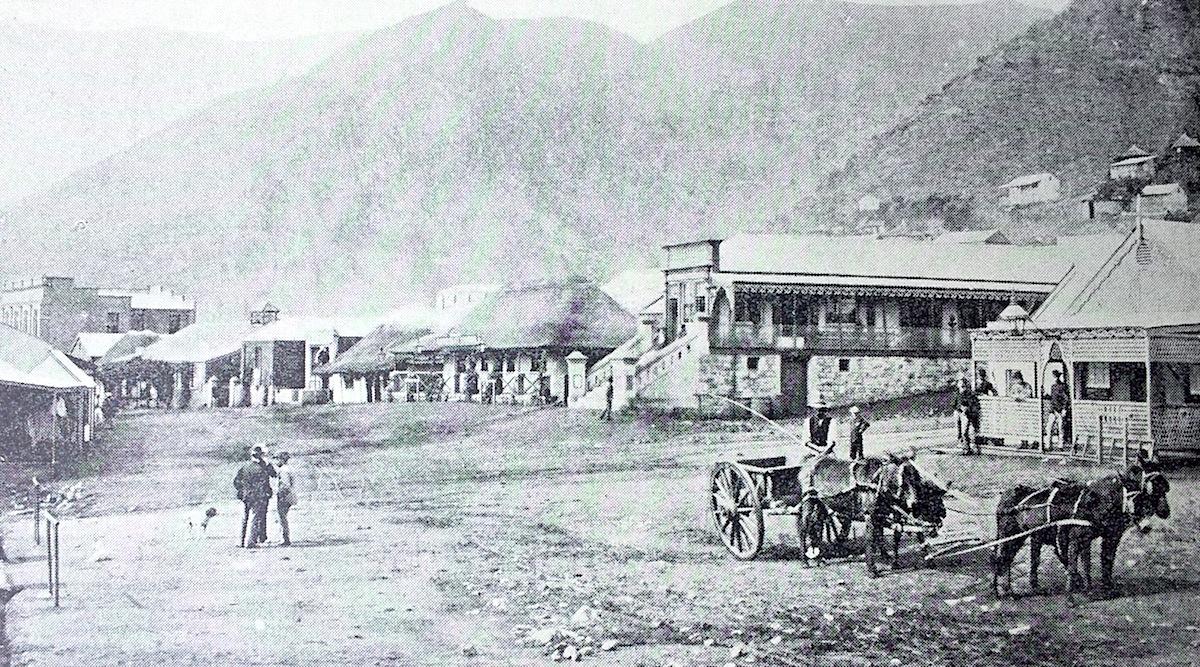 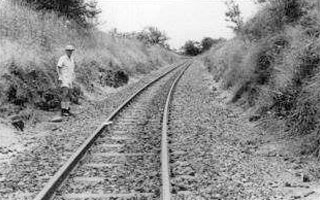 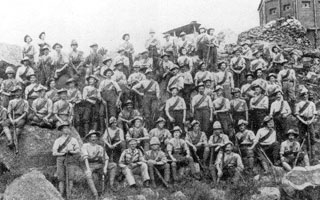 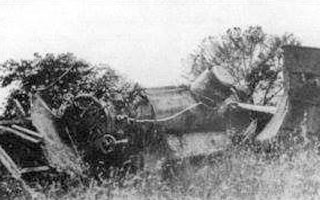 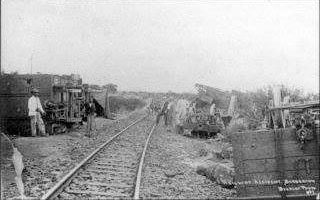 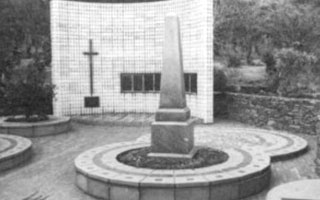 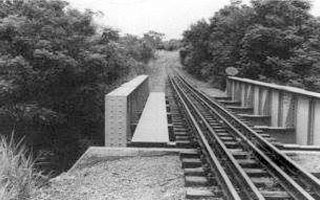